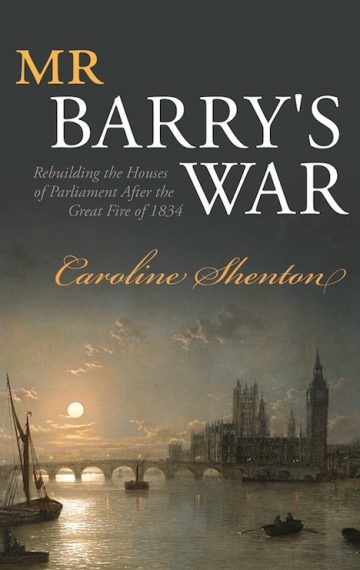 Rebuilding the Houses of Parliament after the Great Fire of 1834

A real jewel, finely wrought and beautiful, just like the Palace of Westminster it describes – Lucy Worsley, BBC History Magazine

It [the rebuilding] was a nightmare and one that Caroline Shenton brilliantly retells in Mr Barry’s War…If her first book was like a grotesque Gothic novel, this is an epic, with a hero at its heart – William Whyte, Literary Review

This is a wonderful tale, brilliantly told. I shan’t ever look at the Houses of Parliament quite the same again and can’t wait to visit soon with new knowledge from this exceptional book –London Historians

This beautifully crafted book walks us through a tumultuous fragment of our history, deftly illuminating every extraordinary step — the rivalries, the soaring ambitions, the barely-hid betrayals, the spectacular personal suffering. As the new Palace of Westminster rose from the ruins of the old it was at times dwarfed by the personal battles that lay behind its creation. This is politics laid on with a mason’s trowel – Lord Dobbs, aka Michael Dobbs, author of House of Cards

Barry has still not received the full biography he deserved and this book makes no claim to fill the gap. Shenton seeks instead to correct the historical record and succeeds definitively…On the eve of a programme of restoration the familiar arguments about cost, the reluctance of MPs and peers to move out, the appropriateness of the building itself are starting up again – Rosemary Hill, Times Literary Supplement