Over 44 artists captured the terrible accidental fire which devastated the old Palace of Westminster on 16 October 1834, and its consequences. Renditions ranged from quick pen and pencil doodles to full-scale oil paintings and commercial engravings. The most frequently-painted view of the fire was from the eastern, Lambeth, bank of the river (the most famous of these are Turner’s two magnificent oils produced in 1835, both now in USA museums). There are a number of views from the Abbey side of the Palace, portraying the west front, and several from the southern end at the top of Abingdon Street (the best of these is William Heath’s highly atmospheric lithograph ‘drawn on stone by the light of the flames’).

Up until now, however, there have been no known images of the fire from the northern end of the Palace showing the view from Parliament Street. There were no doubt a number of practical reasons for this which would have prevented an artist from sketching or painting comfortably and quickly. Streets around the Palace became clogged with spectators very shortly after the fire broke out, and the northern end of the site would have been a particular pinch-point where great masses of people from Whitehall, St James Park and from Westminster Bridge converged. This zone would also have been part of the main route to the disaster for the fire engines of the London Fire Engine Establishment based near St Paul’s in the City, and for the troops coming from Horse Guards and Knightsbridge Barracks, and thus difficult to remain in for lengthy periods.

So it is very significant that a previously unknown painting, loaned by a private collector to Parliament while further investigation into an attribution takes place, shows the scene from this very spot. 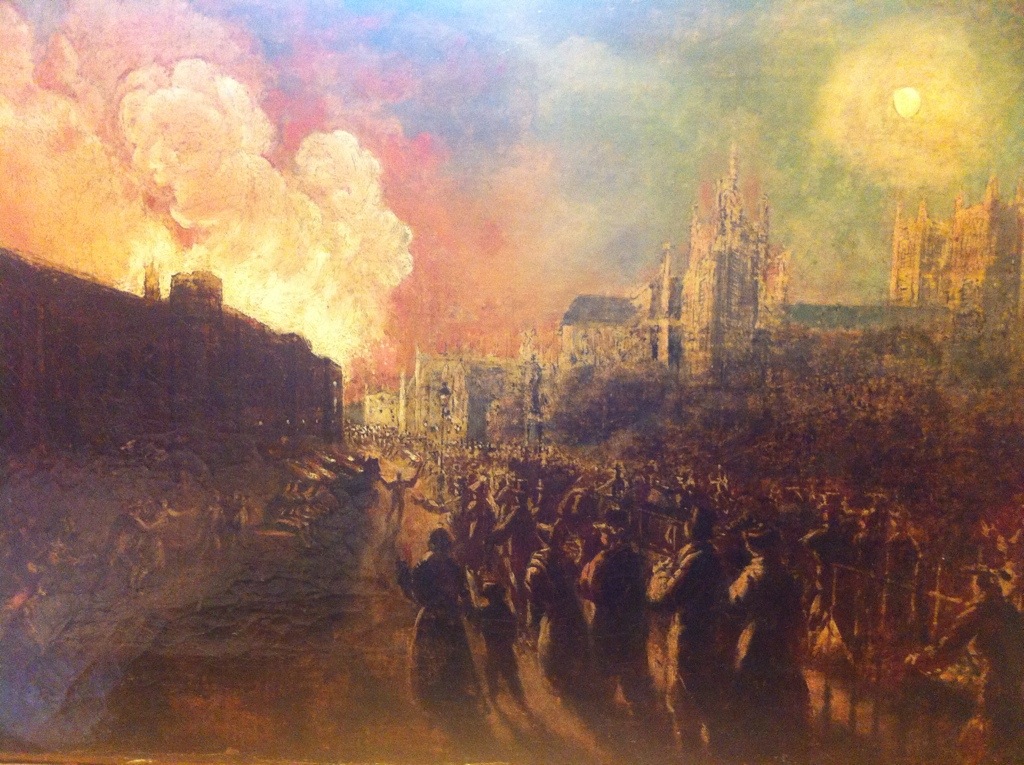 To the left is New Palace Yard, with at least one carriage in place, and to the right, the railings close to the Canning Statue and the Abbey in the background. In the centre is a fire-engine carrying firemen to the scene, which must have just passed by the artist on its way to Old Palace Yard where the fire first broke out in the House of Lords. The current owner of the painting bought it from a Paris antiques dealer around thirteen years ago, at which time it was wrongly attributed to Turner. The accomplished composition and lively brushwork certainly suggests this painting is by a professional artist and one strong possibility is Benjamin Robert Haydon (1786-1846), whose name is found faintly scratched into the rear of the wooden stretcher (and only spotted when examined at Westminster a few weeks ago).

Haydon in fact witnessed the fire. “Good God!” he wrote in his journal the same night, “I am just returned from the terrific burning of the Houses of Parliament. Mary [his sister] and I went in a cab, and drove over the bridge. From the bridge it was sublime. We alighted, and went into a room of a public-house, which was full. The feeling among the people was extraordinary—jokes and radicalism universal. If Ministers had heard the shrewd sense and intelligence of these drunken remarks! I hurried Mary away. Good God, and are that throne and tapestry gone with all their associations! The comfort is there is now a better prospect of painting a House of Lords. Lord Grey said there was no intention of taking the tapestry down — little did he think how soon it would go.” Research is being undertaken by the Curator of Works of Art Office but the fact that Haydon had approached the fire from Westminster Bridge on the night plus a striking similarity of some technical elements with another of painting of his – The Meeting of the Birmingham Political Union (1832/33) – raises the exciting possibility of him being the artist.

By kind permission of the owner, this new discovery will be on display in the ‘No’ lobby of the House of Commons during the summer for visitors on tours of Parliament. 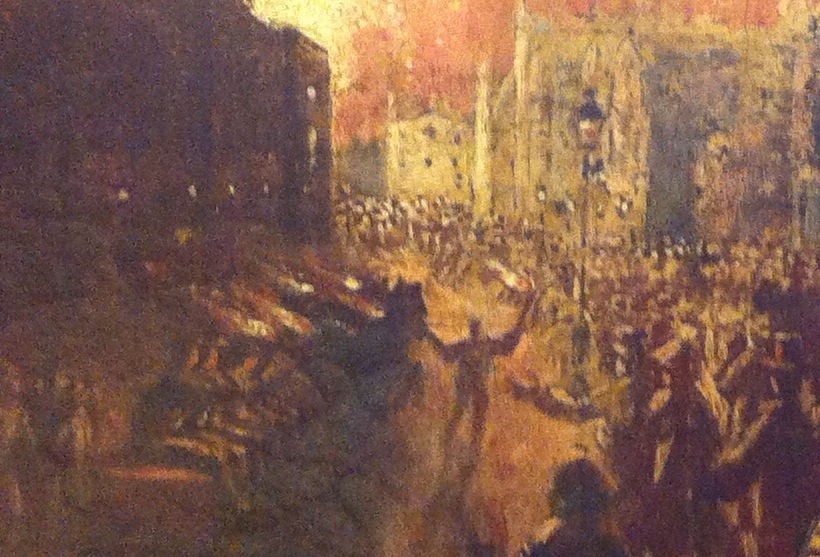