Tate Britain is currently showing a wonderful exhibition called Apocalypse – on the work of John Martin, who specialised in huge and wildly popular paintings of biblical and ancient world disasters.  I highly recommend it.  During my research John Martin hovered on the edge of my reading, because I became very interested in his equally notorious and insane brother Jonathan (1782–1838), who caused the fire at York Minster in 1829.  In fact, at that fire, someone in the crowd was said to have commented how the scene was just like one of John Martin’s paintings (but this may have been poetic licence by the journalist).

“The Martins are all wildish in the head” opined Thomas Carlyle of this strange family, and today there would have been a specific psychiatric diagnosis for brother Jonathan.  The boys’ grandmother mainly brought them up in a strict Methodist tradition, with a strong sense of hellfire and damnation.  During his early childhood in Northumberland he witnessed the violent murder of his sister by a woman neighbour, and he was unable to speak until he was six due to a malformation of his tongue. He was subsequently pressganged into the Navy, where he saw action in the Napoleonic wars. All of this caused him to become increasingly disturbed as a young adult and he started to have vivid dreams and fantasies, which included threatening the assassination of the bishop of Oxford.  After this breakdown he spent some time in asylums, but recovered, turning to freelance preaching and a little painting. 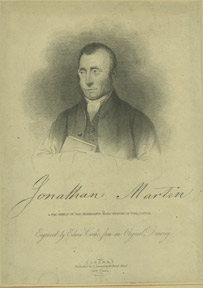 But in February 1829, the noise of the organ at evensong one Sunday in York Minster set him off again, and he hid in the aisle after the service, subsequently starting a bonfire of hymn books in the Choir during the night.  As I researched Jonathan’s life, interested in the contemporary hysteria about arsonists, I realised there were a number of curious parallels between the York and Westminster fires. First of all, there was the delay to discovery. At 8pm, 9pm and 4am a number of people saw a light coming from inside the Minster but thought no more of it. At five in the morning, people heard what they later described as explosions from inside but did nothing. The alarm was sounded only at 7am, when a chorister slipped on the ice in the Minster yard and saw smoke coming from out of a window while flat on his back. By then, the south stalls were found to be well alight. The Minster engine was brought out, and the City and Yorkshire Insurance Company engines arrived in short order. Flames continued to work their way along the stalls to the choir screen, which housed the organ case. Once it reached there, the whole instrument went up, and sang – as organs in fires do, due to the draughts of hot air being sucked through the pipes. It let forth a phantasmal sound, echoing round the Minster and frightening the crowd which had gathered outside. From the top of the organ case the fire then stretched up to the maple bosses of the oak roof, and soon streams of molten lead were pouring down, followed by falling timber. 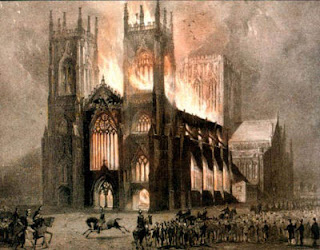 The York fire engines were equally as inadequate to the task, but very much more disorganised, as those at Westminster five years later. The engine pipes became choked with straw and rubbish from the streetplug in Minster Yard, while eyewitnesses described how, ‘from the screen to the altar, the vast area had the appearance of an ignited furnace; and the men who were employed in working the engines and in various ways attempting to stop the progress of the flames, resembled beings of another world…a number of bats and birds, burnt out of their quiet retreats were now seen flitting about, unable to find an outlet: and many perished in the flames’. The speed of the fire was just as terrifying as at Westminster. Once the doors to the Minster were opened on the fire’s discovery, they let in a rush of fresh air which made the wooden stalls burn more fiercely. By 8.30am the beams of the central tower were reported to be catching fire, and half an hour later the first portion of the magnificent medieval roof fell in with a tremendous crash to the choir pavement ninety-nine feet below. Sections of the roof continued to tumble in the smoky darkness until half past ten. By noon the firehoses were prevailing, but the collapsed burning timbers from the roof, collecting at the base of the limestone columns holding up the choir, had to be dragged out of the building to prevent the stone from cracking with the intense heat. The redhot remnants covered Minster Yard. Three more engines arrived on scene before 2pm, and then another three from Leeds – though heavily delayed as one had lost a wheel en route, another suffered a horse which dropped dead, and a third tipped over as it took the corner into Minster Yard at speed. There was however, never any shortage of water, the City waterworks supplying 7,250 hogsheads during the day. Soldiers and police arrived at 5pm after darkness fell. The fire was out before midnight, but had destroyed all the roof of the choir (some 130 feet long and 45 feet wide), 66 medieval carved stalls and their misericords, the galleries, pulpit and the throne. Twenty-one monuments were damaged or destroyed, along with the organ and the Minster music collection, as Martin had intended. The great East window, however, miraculously survived. 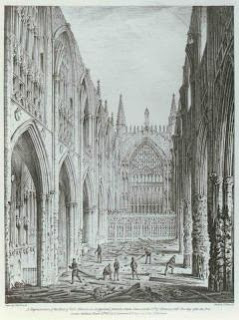 When he was caught, Martin narrowly missed a lynching from the citizens of York, and spent his last years in Bedlam – the asylum on the site of what is now the Imperial War Museum in London.  His son, who had mainly been brought up by John Martin, committed suicide three months after his father’s death in the asylum in 1838.   A tragic family indeed.  If you’d like to know more about the strange life of Jonathan Martin, there is a good article on him in the Oxford Dictionary of National Biography and also a biography by T. Balston, The life of Jonathan Martin … with some account of William and Richard Martin (1945).