This week is Parliament Week, and 2013’s theme is ‘Women in Democracy’.  I thought it would be fun therefore to provide you with a description of what it was like for women to visit a debate in the House of Commons before the 1834 fire. This well-known account comes from the Irish novelist Maria Edgeworth, who described how female visitors to debates had to climb up into the attic storey of St Stephen’s Chapel in order to get any glimpse of the MPs at work, since there was no provision made for them in the public galleries below. 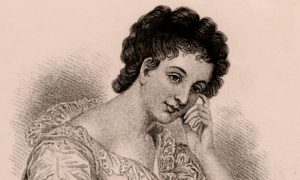 She wrote to a friend, Mrs Ruxton, in 1822 what she had experienced: “A garret the whole size of the room – the former chapel – now the House of Commons; below kitcats of Gothic chapel windows stopped up appear on each side above the floor; above, roof-beams. One lantern with one farthing candle in a tin candlestick, all the light.  In the middle of the garret is what seem like a sentry box of deal boards, and old chairs placed round it; on these we got and stood and peeped over the top of the boards. Saw large chandelier with lights blazing immediately below; a grating of iron across veiled the light so that we could look down and beyond it.  We saw half the Table the Mace lying on it, and papers, and, by peering hard, twofigures of clubs at the farther end; but no eye could see the Speaker or his chair – only his feet; his voice and terrible ‘Order’ was soon heard. We could see part of the Treasury [government] Bench and the Opposition in their places – the tops of their heads, profiles and gestures perfectly.  There was not any interesting debate – the Knightsbridge affair and the salt tax – but it was entertaining to us because we were curious to see and hear the principal speakers on each side…The whole, the speaking and the interest of the scene surpassed our expectations, and we felt proud to mark the vast difference between the English House of Commons and the French Chambre des Députés.”

A similar account comes from another visitor, Alicia Payne, who in old age compared the old House with the new in 1870: “Only the lower half of St Stephen’s Chapel had been used by the Commons.  The upper part with its vaulted roof and unglazed windows, was a large vacant chamber.  In the centre of this was a wooden lantern called ‘the ventilator’.  This had eight small openings in it, just large enough to admit a head, and was surrounded by a circular bench.  By this means ladies who were privileged to go there could catch a glimpse of speakers with in a certain radius.  When tired of peering through these pigeon-holes we roamed about our prison, and it was very refreshing to look out on a summer’s evening upon the Thames.  We were locked up, and every now and then our custodian came to tell us who was ‘on his feet’.  Sometimes members came up…the present gilded cage [the Ladies Gallery in the new Houses of Parliament] which is so complained about is a paradise to the draughty dusty room I speak of, but we liked it nevertheless and it was a great treat to have tea in a Committee-room.” 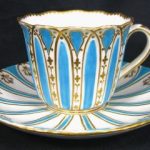