This post is perhaps a tad geeky, but since the all-time most popular entry on this blog turns out to be my musings on the restored Reichstag in Berlin, I now offer you some thoughts on the Seimas in Vilnius, Lithuania.  (This could be the start of a glossy coffee table book, Great Parliament Buildings I Have Known.  Or maybe not.)  Anyway, Parliament buildings are interesting for the way they reflect their country’s history of democracy and the relationship with their citizens.  They become symbolic of the society their Parliament represents through their layout, design and the role they have played – as buildings, rather than as legislatures – in their country’s political history.

So, to Lithuania’s story. In October this year, I attended a conference of Parliamentary archivists from across the world, and our proceedings took place in the Seimas, or Parliament, where we had a chance to go on a fascinating behind-the-scenes tour. Like all the Baltic States, Lithuania has a sad history of occupation which goes back centuries. There was a Seimas in the second half of the 15th century, but this disappeared once Lithuania merged with Poland.  United with the Polish Kingdom as a grand duchy for over 200 years, Lithuania was governed from Warsaw, and then annexed to the Russian Empire in 1795. At the Revolution, Lithuania broke away from its colonial overlords, and made a declaration of Independence on 16 February 1918. It had a brief period of democracy from 1920 to 1926 but then the Seimas was dissolved by the President Antanas Smetona who ruled as a dictator, later in collaboration with the Nazis until 1940, when the Soviet Union invaded and Lithuania became part of the USSR. Like other Soviet Republics, the national legislature – known as the Supreme Soviet – was merely a group of puppet representatives following the orders of the local communist party.

As the Soviet Union began to fall apart after the Berlin Wall came down, the reform movement in Lithuania won an overwhelming majority in the first free elections in February 1990.  The Supreme Council of the Reconstituted Seimas declared its independence on 11 March 1990, and the crumbling USSR began to apply political sanctions and an economic blockade against Lithuania, in a desperate attempt to keep its grip on the country.  When those didn’t work, a brutal last-ditch attempt to intimidate the Lithuanians was made.

And here is where the Parliament building comes in.  Soviet troops stormed the State TV and Radio buildings in Vilnius on 13 January 1991, killing 14 people and injuring another 600.  Tanks then began trundling towards Parliament.  That met with an immediate response from the people of Vilnius, who raised barricades around the despised 1950s Supreme Soviet building, now reincarnated as a democratic Seimas building, and they camped out to protect it.  Some evocative pictures of that anxious time are here:

Fuel for the Protest

Preparing for the Worst

The Seimas behind Bars

No to the New Chains

The protestors continued to protect the building until the autumn of 1991, when it became clear that the USSR had given up its claim and the hardline attempted coup in Moscow was over.  The Soviet army finally left on 31 August 1993, and that’s when, for Lithuanians, the Second World War really ended at last.

To find out more about the Lithuanian Parliament, have a look at their information in English.

In recent years, the Seimas has built two new buildings, annexed to the 1950s Soviet Soviet building.  Although the latter now has an iconic place in the story of the independence struggle, there are still bad memories of its use during the Soviet era, so today the Seimas has its chamber in the more modern wings of the building. 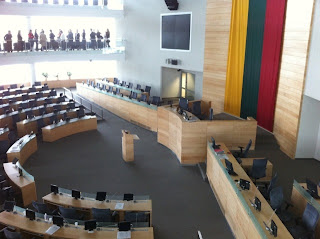 The interior of the new Seimas chamber: a fresh start

And finally, to recall the key role which the barricades played in saving the Lithuanian Parliament, some have been built into the fabric of the new wing of the Seimas.