Last week I returned from the United States, where I had been attending some events associated with the loan of the 1765 Stamp Act to the New York Historical Society’s grand reopening exhibition, Revolution!  I then extended the trip to include Washington DC in order visit the National Archives, the Library of Congress, the Smithsonian Archives and the Capitol Visitor Center to bring back ideas for the Parliamentary Archives in London.  It’s Thanksgiving today, so altogether this is a good moment to talk a bit about the Capitol as a symbol, in my occasional series about other Parliamentary buildings.

The site of ‘Federal City’ was established in 1790 by statute – the Residence Act – at a site on the Potomac river nominated by Congress. Work began almost immediately to create a Parliamentary building for the newly-united colonies in what was to become known as Washington DC. As might be expected, the building – whose cornerstone was laid in 1793 – was ripe with symbolism.

The architects Benjamin Henry Latrobe and Charles Bulfinch took as their inspiration classical models. With a Senate forming part of the new Congress as well as a House of Representatives – a division of power known as the “Great Compromise” – the site selected for the new building was already set to imitate the Capitoline Hill in Rome, being a wooded slope above the marshy Potomac plain below. The interior halls of the two original wings of the Capitol (one wing for each of the equal parts of Congress) were decorated with Italian-influenced frescoes and a domed central space was planned to join them together. It was clear from the start that Greek and Roman was the favoured national style for the United States; much in contrast, for example, to the Gothick pastiche applied to the old Palace of Westminster at much the same time, and to the so-called ‘national style’ laid down for a new Parliament building for the United Kingdom some 45 years later: defined as Gothic or Elizabethan.  Eventually, two great ceremonial avenues called ‘Independence’ and ‘Constitution’ were later constructed to lead  to the building which stood at the centre of the Federal City and by implication, the whole nation.  And it was ordered that no building should be higher than the Capitol – meaning that at the start of the 21st century, Washington is completely free of skyscrapers and the open sky is remarkably visible in the city.

Since those early years, the Capitol has been modified and extended many times; a reflection of the search for the ever ‘more perfect Union’ to which the US Constitution aspires. And its frequent reworkings have reflected the traumas of US history too.  In revenge for the burning of similar buildings in Canada, in 1814 the British burnt both the new Capitol and the White House (the latter getting its permanent name from the whitewash used to cover the smoke staining on its walls).  The Capitol’s shell was rebuilt inside, and the Library of Congress (kept inside) was replaced by the purchase of Thomas Jefferson’s personal book collection which he sold to pay off personal debts.

During the American Civil War, the Capitol then became a metaphor for what was happening to the nation.  The southern representatives and senators had departed the building and Washington DC, just as the southern states had seceded from the Union.  Parts of the building became barracks for 75,000 troops and the wounded were treated for a short time in 1862 in the Rotunda, the old House Hall, and its corridors.  In the same way, both Union and Confederate states were flooded with casualties.  The construction of the famous Capitol Dome following a fire in 1851 was already underway when the Civil War broke out.  Modelled on the double-skinned classical domes of St Paul’s in London, St Isaac’s in St Petersburg, and – naturally – St Peter’s in Rome – building work continued through the war, leading President Lincoln to see it as sign that the Union would survive the current crisis.  He subsequently gave one of his most famous speeches, the 2nd Inaugural, on the East Front Steps in 1865, and when he was assassinated 6 weeks later, his body lay in state under the newly finished dome, beneath the part-completely fresco of The Apotheosis of Washington. 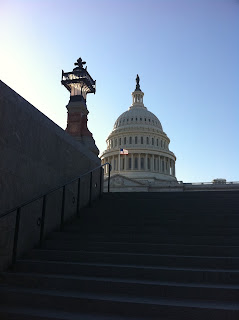 But there was, of course, a deep irony in the creation of this secular temple to democracy.  All men did not have the right to life, liberty and the pursuit of happiness in the United States at the time of its construction.  Enslaved African-Americans built the original Capitol, and an enslaved craftsman called Philip Reid oversaw the bronze casting of the great Statue of Freedom (designed in Rome in plaster and shipped over the Atlantic for casting) on top of its dome in the mid 19th century.  He was emancipated in 1862, and so was a free man by the time the Statue was placed on top of the Dome.  In belated recognition of these forgotten people, the huge central space of the new Capitol Visitor Centre, completed in 2007, beneath the building and welcoming millions from around the world every year, was named the “Emancipation Hall” in a long-delayed acknowledgment of the enslaved labourers’ contribution.