A recent trip to Jerusalem included a visit to the Knesset.  Getting there on foot is quite hard work: up a modern hairpin road on a steep hill outside West Jerusalem (should have taken the bus).  Approached from the back, it was rather forbidding because of the high security fence around it, and the untended grounds on the perimeter. 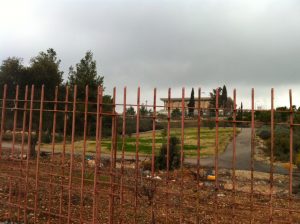 There was also a slow steady drizzle coming down, and a sky full of glowering clouds, which did not improve my mood. Nevertheless, I was delighted to have visited, as the symbolism of the site is rich. 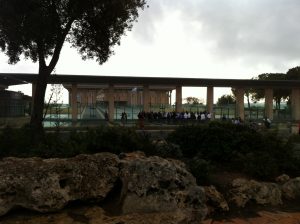 The building itself was built in the 1960s on the Givat Ram hill, and houses the unicameral legislature of Israel.  Its construction was funded by the Anglo-French philanthropist James A Rothschild (1878-1957) as a gift to the State, on land leased from the Greek Orthodox Patriarchate. 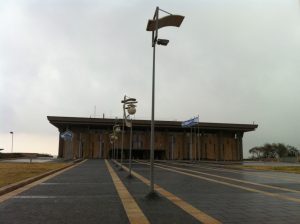 Outside the main gate is a large bronze menorah, or ritual candlestick, representing the modern state of Israel donated by the Anglo-Jewish community.  The seven-branched Menorah was created by Benno Elkan (1877-1960), a German-born Jewish sculptor who emigrated to the UK – for obvious reasons – in 1933.  The Menorah illustrates 29 scenes from the Old Testament and the history of the Jewish People, including the rebellion of the Warsaw Ghetto. 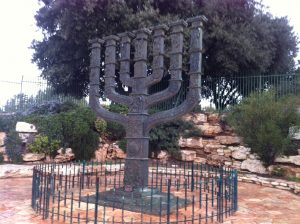 The Menorah was commissioned and presented by Edwin, Lord Samuel, son of Sir Herbert Samuel who had been the first British High Commissioner to Palestine under the Mandate. Funded by donors across the UK, it was cast in the 1950s and reached Israel by sea in 1956.  At first it stood in a public garden close to Beit Frumin in central West Jerusalem, where the Knesset was based from 1950 to 1966 (below), but in the summer of ’66 it was moved to its current home, when the Knesset transferred to its permanent building. 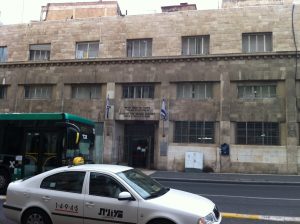 But to understand the true symbolism of the Knesset’s location, you have to walk down the hill on the other side to the excellent Israel Museum.  There, looking up towards the Parliament building, is The Shrine of the Book.

The Shrine – an exhibition hall – houses the world’s oldest copies of biblical texts, and the ancient receptacles in which they were found, displayed alongside other rare manucripts including the Aleppo Codex.  The building was opened in 1965 and is deliberately located close to the Knesset, the Supreme Court of Justice and various government buildings.  It was designed by Armand Bartos and Frederick Kiesler to ‘convey spiritual messages through the language of architecture’.  The white dome is a reference to the lids of the jars in which the Dead Sea Scrolls were found at Khirbet Qumran in the Judean Desert, while the sprays of water covering the dome represent purity, one of the main components in the lives of the sectaries who created the Dead Sea Scrolls millennia ago.

Meanwhile, it is not possible to visit the Palestinian Legislative Council HQ in Rimal because the UK Foreign Office advises against all travel to Gaza.  There is also a half-constructed Parliament building for the West Bank in Abu Dis (a distant suburb of East Jerusalem), which in 2003 became derelict after the collapse of the Oslo Accords, and the Second Intifada: “a massive relic and a testimony to the failure of political negotiations” as a recent research project has described it (photo below: Carina Ottimo).