Today is the 150th anniversary of the death of Superintendant James Braidwood. He was the man who saved Westminster Hall in the great fire of 1834 through the innovative firefighting techniques he had first developed when fire chief in Edinburgh.

His death was both tragic and horribly ironic. He died at the enormous Tooley Street warehouse fire in 1861, when he was buried under a falling wall – his body was retrieved only two days later. The iron firedoors which he had designed and recommended for all such premises had been left open, causing his death. If there was one other fire between 1666 and the Blitz which deserves the dubious accolade of being the ‘greatest’, beside the 1834 blaze, it was the Tooley Street conflagration. The Westminster fire was certainly the more significant, but Tooley Street was bigger and more prolonged: the tallow inside the warehouses melted, and set fire to the Thames for two weeks afterwards. A plaque marks the spot of the 1861 fire, today close to London Bridge station.

In 2008 a statue to Braidwood was finally erected on Parliament Square – but not the one in Westminster, the one off the Royal Mile in Edinburgh. But perhaps his greatest memorial is Westminster Hall, still standing after 900 years, because of his efforts and those of his men. 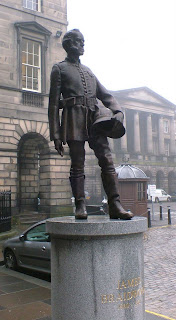