When the young Charles Barry visited Paris on the first leg of his Grand Tour in 1817, he  had yet to acquire the necessary social polish of a gentleman.  On his arrival the future architect of the new Palace of Westminster made a few blunders in polite society which he never repeated.  His diaries are full of what he was wearing and what others were too, but he didn’t always get it right.  One particularly embarrassing faux-pas he described as follows:

Sunday July 20th. After breakfast we went to the Miss Gibsons lodging, and I asked one of them to go to the Chapelle Royale.  The eldest accepted the invitation with great pleasure and I had the honour of escorting her there.  Our ticket being for two only, Mr Conduit went to the Protestant church, and left us to go in by ourselves.  But to my great mortification, I was not allowed to enter on account of wearing nankeen trousers instead of black silk stockings and breeches.  I was determined that Miss Gibson should not be disappointed, so prevailed on her to take the ticket and follow the crowd.  I had no doubt that from the respectability of the people and a great part of them being English, she would meet with some friends who would take care of her.  I waited in the Tuileries Gardens until she came out, during which time the King presented himself on the Balcony, where I had a most excellent view of him.  I walked about the Gardens with Miss Gibson, and afterwards saw her home. [K. Adkins, ed., Personal and Historical Extracts from the Travel Diaries (1817-1820) of Sir Charles Barry 1795-1860, London, 1986, p. 11.]

So what exactly were Nankeen trousers? Nankeens were pale yellow pantaloons for men, in fashion after the Napoleonic wars, which replaced the knee-length breeches and stockings of the pre-Revolutionary period.  These full-length trousers got their name from the cotton cloth they were made from, originating in  Nanking, China.   This tells us two things.  Firstly, Charles was clearly  a bit of a hipster dude, and liked fashionable clothes very much; something which is evident in later portraits of him.  The other is that here is the very ancestor of the Chino, a buff-coloured cotton trouser for men, which takes its name also from the Chinese cloth it is made from. 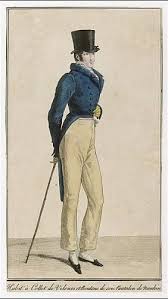