Once upon a time, in a galaxy far, far, away I used to be a medieval historian. I still describe myself as that (“I’m a medievalist really”) when I can’t quite get my head round having written a book about a late Georgian subject.

But my interest in 14th century history and 19th century Parliaments comes together quite neatly when discussing the Chapel of St Stephen’s in the Palace of Westminster, home of the House of Commons from 1548, and destroyed in the 1834 fire.

I am particularly interested in the iconography of the Chapel. In 1349, in its foundation charter, Edward III dedicated the building not only to St Stephen, but also to the Blessed Virgin, whom he believed had protected him through various dangers (including victory at the Battle of Crecy in 1346) through her prayers. She had – as he put it – been a second ‘better’ mother to him. This is quite a quite a stunning public statement, when you remember that Edward III’s mother was Isabella , the so-called ‘She Wolf of France’, who had ruled as regent after the murder of her husband Edward II on the orders of her lover, Roger Mortimer. Isabella was still alive in 1349. During the regency (from 1327-1330) Isabella and Roger had done all they could to downgrade the position of Edward III’s new bride, Philippa of Hainault, fearful that her power would grow once she gave birth to an heir – which she did in 1330: Edward of Woodstock, later known as the Black Prince. 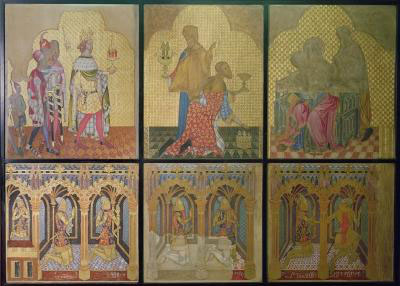 In the wall paintings of St Stephen’s in the late 1340s, Philippa regained her rightful place beside her husband. These reconstructions by Professor E. W. Tristram at the Palace of Westminster, based on drawings made in the early 19th century, show the entire royal family in public adoration of the Virgin. On the north side of the east end of the Chapel (above) Edward III and his sons kneel in decorative niches along the length of the wall, with St George. 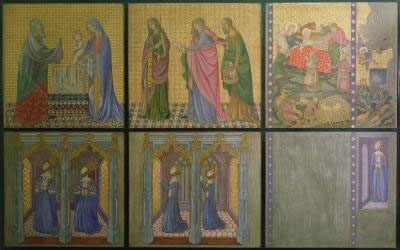 On the opposite side (above), Philippa and her daughters mirror the devotions of the male members of the family. Above the high altar, the Virgin and Child received the Magi under the gaze of Edward and Philippa. The emphasis is on intimate family groups – Mary and her baby; royal parents and their children. Edward was seeking to repair the fault line in his own family with his worship of the most perfect mother of them all, who image stood at the centre of his private palace chapel.

If you’d like to know more about Isabella and Philippa’s rivalry see C. Shenton, ‘Philippa of Hainault’s Churchings: the politics of motherhood at the court of Edward III’, Family and Dynasty in Late Medieval England: Proceedings of the 1997 Harlaxton Symposium eds. Richard Eales and Shaun Tyas (2003), pp. 105-121.