By the early 1830s, many people thought that Parliament should move away from Westminster to the West End. Part of the reason was that John Nash’s development of Regent’s Street had shifted the fashionable focus of the City north-west. One of the trendy delights in the former Marylebone Fields was the new Zoological Gardens at Regent’s Park. Until 1832, the royal animal collection was housed in the Tower of London, and was a popular attraction in late Georgian England. I recently bought a small guidebook to the Tower (still in its cheap paper wrappers) dating from 1827, in a second-hand bookshop. Here is what it has to say about the collection: both fascinating and poignant at the same time. 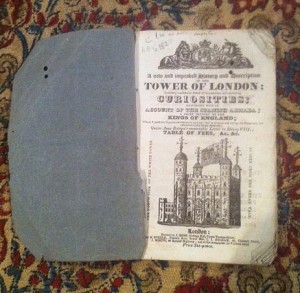 Situate a few paces within the outer Gate, and distinguished by a painted Lion placed over the door of the building, for the purpose of attracting the notice of strangers. Very great improvements and additions to this office have been made since our last edition, of which, the following account presents a pleasing proof to the curious. The larger animals, of which there is a noble collection, are confined in dens disposed in the form of a half moon, in order that a full and comprehensive view may be at once afforded; and as the animals by this arrangement are permitted to see one another, it is not unusual to witness the gaze of recognition or hear the growl of defiance produced by the proximity described. The construction of the dens is also deserving attention, inasmuch as they present every facility for cleanliness, being divided into two apartments, the upper and the lower, in the latter of which the beast may be made to retire at the will of the keeper. The whole are judiciously fronted with large iron grates, for the two-fold purpose of exhibition and security. The effect on entering is terrifically grand. The wildest forms of savage nature collected at a prodigious expense and variously occupied, not only fill the mind with astonishment and admiration, but convey, beyond the power of description, a knowledge of their peculiar figure, habit and character. The docility manifested by some, is also calculated to impress the observer with the conviction of the supremacy of man and the ascendancy which the Almighty has given him over the fiercest attributes of the brute creation. Adjoining, is another display not less interesting, being composed of animals of various kinds and sizes, and an extensive assemblage of the rarest specimens of the feathered tribe. The majesty and beauty of these, their diversity and the extreme tractability which many of them evince, contribute also to render the view one of more than ordinary pleasure and amusement. Within the interior, and supported by an artificial atmosphere, a numerous collection of living serpents of gigantic length and circumference, repose in folds, or twine in various ways their mottled bodies. Having made these preliminary observations, we proceed to particularize.

SIX GREAT BOA CONSTRICTOR
SERPENTS, from Ceylon. — Also, the wonder of the Age, never before seen alive in England

THE HARLEQUIN SNAKE,
whose variety of colours and great beauty surpasses the possibility of description; together with Two ROCK Serpents, from Bengal; Four ANNACONDA Serpents from the Island of Java, &c. &c.

A full grown majestic LION, with a large flowing mane, from the coast of Barbary, being the largest that has been brought to England for many years; also a fine young LIONESS from the same Coast, recently arrived. A black-maned Caffrarian Lion. A beautiful Cape Lion. A pair of Silver-maned Bengal Lions, presented to the KING by General Watson, the only pair of this kind ever seen in England. A beautiful hunting Leopard, from Ceylon. A pair of enormous black Wolves from the Polar regions, the only ones ever seen alive in England. The Esquimaux Dog, brought from the North Pole by Captain PARRY, in his last Expedition.

the greatest curiosity the Menagerie ever held, as it is the first (after repeated effort) ever brought alive to this country. A pair of oriental LEOPARDS, remarkable for their docility. The OSCALOT, or Tyger in miniature. A beautiful PANTHER, presented by the Marchioness of Londonderry, the most exquisite animal of the kind ever seen in Europe. An enormous grisly BEAR from Hudson’s Bay whose bulk exceeds that of an Ox, presented by the Hudson’s Bay Company. A pair of Cinnamon Bears, a most extraordinary species. A brown Russian Bear, presented to the Menagerie by Sir George Alderson.

Contains five Southern OSTRICHES, presented to the KING, That Extraordinary Bird the PELICAN of the Wilderness, represented to feed its young with its own Blood. The Adjutant, or Gigantic Crane, a bird held sacred by the Hindoos. A most Beautiful Deer from Japan, the first of this kind ever before in England. The Cyrus Crane, from Ceylon, an extraordinary description. Black Swans. A pair of horned Owls, from Hudson’s Bay. A pair of Quams. A Bush Turkey. The Curosoe Bird or Crow Pheasant, from Trinidad, presented by Sir Ralph Woodford. The Mouflon, from Caffraria. Chinese Gold and Silver Pheasants, Macaws, Cockatoos, Parrots, Paroquets. The Condora, or Brazilian Vulture. A most extraordinary species of Sheep, from Persia, the first of the kind ever seen in England. The Golden Eagle; and a great variety of other Birds of the most splendid plumage.

The admittance is 1s. each person to see the whole. The Beasts are regularly fed at Three o’Clock in the afternoon, which will be found the most interesting time. No Extra Charge. Having quitted the Menagerie and passed over the stone bridge through the fourth gate of the Tower, one of the warders will accompany you to The Spanish Armory.

From: A New and Improved History and Description
of the Tower of London (Printed by J. King, College Hill [1827])

If you like this blogpost on a historic London guidebook entry, you might also like A Regency Stroll Around London, 1817. You can find out more about the predecessor to London Zoo in Daniel Hahn, The Tower Menagerie (London, 2004). Or if in London, you could visit the new permanent exhibition Royal Beasts at the Tower of London.