James Gillray (1756-1815) was one the most brilliant caricaturists of all time.  He was brought up in the Moravian faith, a strict Protestant sect which forebade any form of entertainment or indulgence. Although he rebelled as an adult against this, becoming a student at the Royal Academy, its influence can be seen in his engravings which are simultaneously disgusted with human excess but also exuberantly scatological and pornographic.

Gillray’s most famous caricatures are those satirising politicians and royalty, most especially Fox, Pitt, and George, Prince of Wales.  Although – like many – initially delighted with the outbreak of the French Revolution, once things took a darker turn across the Channel, Gillray used all of his powers to portray the Terror and the subsequent rise to power of Napoleon including, famously, his Promis’d Horrors of the French Invasion in 1796.

Two years later, he followed this up with ‘Consequences of a Successful French Invasion’ depicting the interior of the Houses of Parliament should Napoleon ever manage to get as far as Westminster.  The first shows a scene of pillage in the House of Lords chamber entitled ‘We explain de Rights of Man to de Noblesse’.  This building had been used by the Lords since 1291 (it had previously been the Queen’s bedroom), and was the one which Guy Fawkes had tried to blow up at State Opening in 1605.  In the cartoon, the throne has been replaced with a Guillotine, its canopy is emblazoned ‘Confusion to All Order’ and topped with the red cap of liberty. Napoleon directs his men to tear down the Armada Tapestries on the walls, and set fire to them from the red benches, while the mace is carried away. 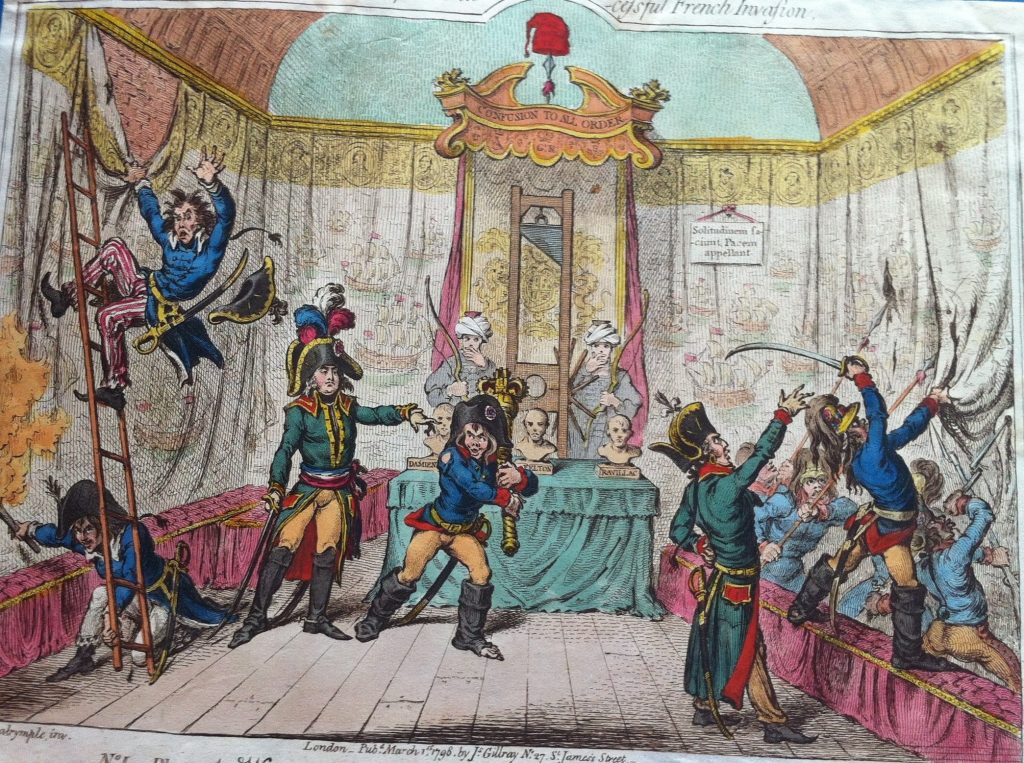 This is a pretty accurate representation of the Lords chamber in 1798, with its characteristic coffered ceiling and famous wallhangings.  These features can be compared with their appearance in two other portrayals of the building, namely The Death of Chatham by John Singleton Copley (National Portrait Gallery, London) 1781: 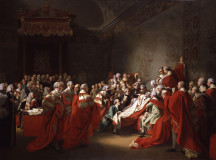 Meanwhile the second cartoon shows what is happening in the House of Commons where the French declare, ‘We come to recover your long-lost liberties’. 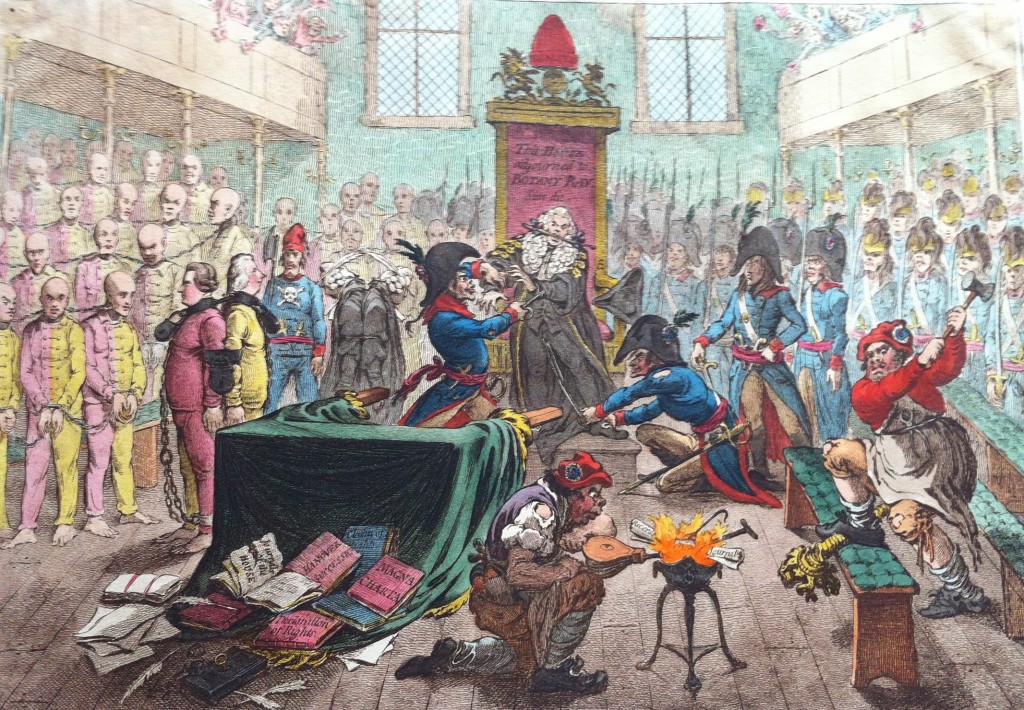 The Napoleonic forces have stripped, shaved and handcuffed the MPs, dressing them in convict uniforms prior to transportation. The Speaker’s chair announces, ‘This House is adjourned to Botany Bay sine die’, and the Speaker himself has been gagged. One rough-looking sans-culottes is in the process of destroying the mace with a sledge hammer, the symbol of the Commons’ power, while another  stokes a brazier ready to set fire to various documents including the Bill of Rights 1689 and Magna Carta 1215, which have toppled off the overturned Clerks’ table.

Compare this with the Commons chamber depicted in the 1808 Microcosm of London by Auguste Pugin and Thomas Rowlandson. 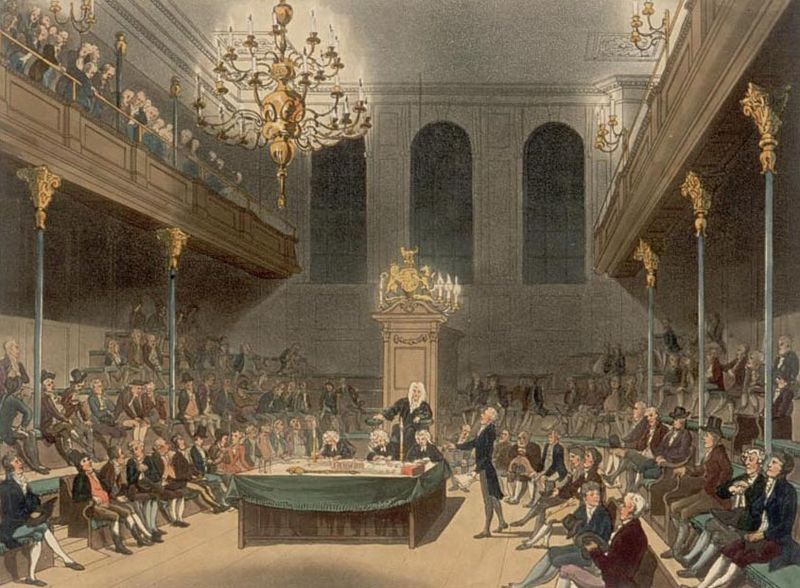 Happily, Gillray’s nightmare scenarios did not come to pass. But both buildings changed forever just two years later. The Act of Union with Ireland in 1800 required that more MPs and Peers be accommodated at Westminster when the Irish Parliament was abolished. In the Commons, James Wyatt controversially expanded the width of the Commons to provide more benches, and redesigned its east end (this explains the three windows in the Microcosm of 1808, rather than the two windows in the Gillray). And the Lords had to move out of their ancient chamber altogether to another building in the Palace complex called the Lesser Hall, or White Hall in order to fit all the new peers in.  It was this final building which was the point of origin of the terrible fire of 1834.