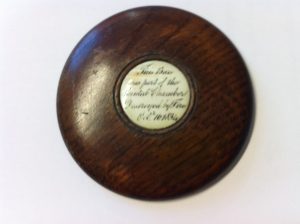 One of my hopes on publishing The Day Parliament Burned Down was that new information which I had been unable to track down in my research would come to light when readers and audiences got to hear about the fire.  The most obvious one was to find out what ultimately happened to Chance the dog, but I also wondered if people might come forward with more eye-witness accounts I hadn’t found or maybe more pictures I hadn’t seen.

And I’m thrilled to say that three months in, this is starting to happen.  I was delighted when someone  approached me after a talk and told me about a box they had recently purchased from an antiques dealer, purporting to be a relic of the old Palace.  I discuss the wooden boxes made from the charred timbers of St Stephen’s and the lead medals cast from its melted roof in the penultimate chapter of my book.  I had never found any pictures of these items so until now had to imagine what they looked like.  No longer.  The owner very kindly allowed me to take some photos of their souvenir, which is a small round snuffbox inlaid with an ivory label. 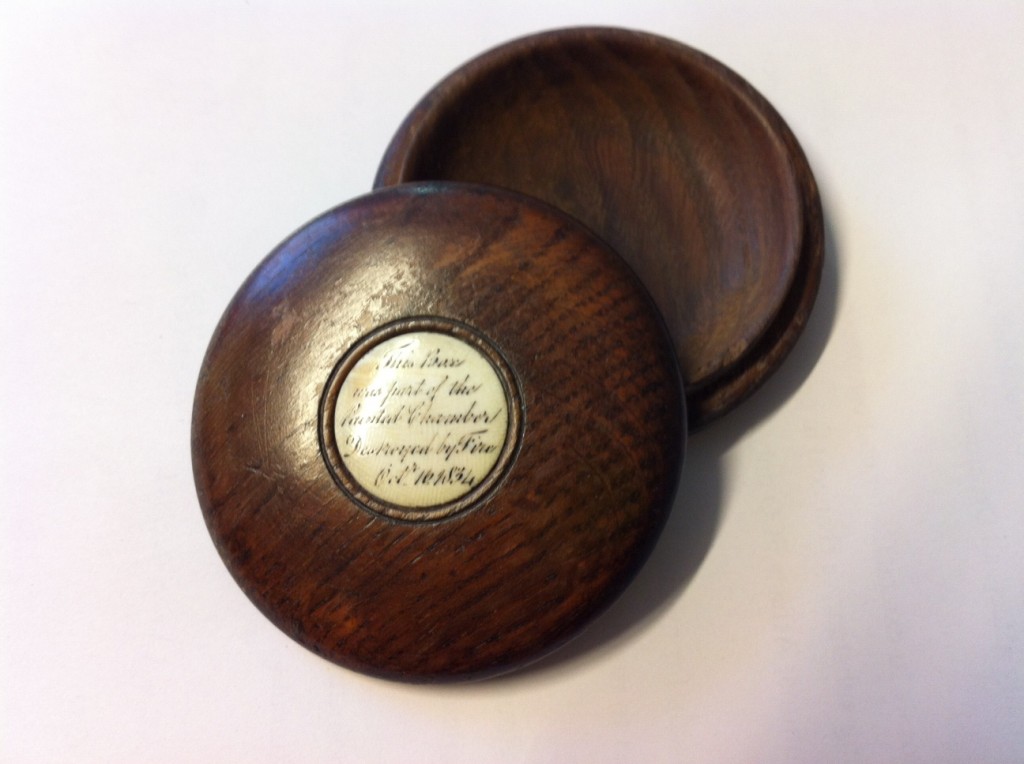 It reads: ‘This box was part of the Painted Chamber Destroyed by Fire Octr 16 1834’.  Altogether this is a rather superior version.

As if this wasn’t exciting enough, it turned out that this was one of three boxes for sale from the dealer, so I got in touch to see if the others had been sold.  Sadly they had (would have made a nice Christmas present for me!), but there was still a record of them on dealer’s website.

The second box (below) was made of oak, with a silver label, nicely engraved with the words ‘This box was part of the roof of the House of Commons destroyd by fire October 16th 1834’. 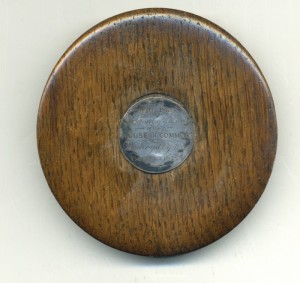 And the third box, again from the Painted Chamber (below), was a more modest affair, oak again but this time with die-stamped lead label.  It corresponds most closely with the souvenirs I describe in the book – cheap and cheerful, and presumably produced en masse to meet popular demand.  It reads: ‘Made from wood forming part of the Painted Chamber House of Lords 1065’. 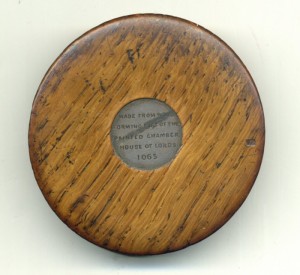 ‘1065’ could, I suppose, be a misattribution of the date of the building of the Painted Chamber which was in fact thirteenth-century, but it is more likely surely that this is a serial number of the box, such were the quantities being turned out in the weeks and months following the fire.

I’d like to thank the owner of the original box for showing this fascinating relic to me and enabling me to share this with you.  I am always very happy to hear of more…!