Because of the 1834 fire which burnt it down, many people don’t realise that there was a Houses of Parliament on site at Westminster – the old Palace  – before Barry and Pugin designed the current one.  Still fewer know what it looked like.  That’s led to some startling anachronisms when illustrating historic Parliamentary events, particularly in relation to the Gunpowder Plot of 1605.  Today is Bonfire Night, so I offer these historical thoughts for you to ponder between bangers of all kinds. (For non-UK readers this blog, find out more about Guy Fawkes and Bonfire Night before reading on).


In 2003, I remember being struck by an Institute of Physics project at the University of Wales which had tried to model the impact the explosion would have had, if it had succeeded. The physicists found that the damage to surrounding buildings was enormous, with Westminster Hall and Westminster Abbey being flattened and damage as far as Whitehall, over a third of mile away. They worked out that Guy Fawkes had used 25 times the amount of gunpowder he actually would have needed to achieve his aims.  But a newspaper report that caught my eye the next day showed a picture of the new Palace in ruins (not a happy thought).  The Gunpowder Plot is a source of endless fascination and many books, websites and educational items have been produced on it.  But unfortunately, they often make the same mistake and set the Plot against a background of the neo-Gothic Palace, built in the middle of the 19th century.  Some good examples of this are here, here, here and here (hmmm…).


There are exceptions.  In 2005, for the 400th anniversary of the foiling of the Plot, a TV programme simulated the explosion to see what might have happened if the Plot had succeeded, correctly blowing up a facsimile of the old House of Lords, with spectacular results.  The film doesn’t give you the impact on surrounding buildings, but you get the idea – and the size and shape of the Lords Chamber is correct, for once (the cross section of the old House of Lords below is held in the Parliamentary Archives: note the ground floor ‘cellar’ underneath). 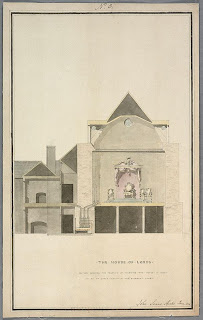 In fact, the House of Lords chamber which Guy Fawkes tried to destroy (originally the 13th century Queen’s Chamber of the medieval Palace) didn’t even make it to 1834.  The Lords moved out of the ancient building in 1801 following the Act of Union with Ireland, and the decaying building was later pulled down by the architect Sir John Soane, to make way for his new Royal Gallery and Staircase (in fact the plan above is by the famous architect).   The Soane buildings survived until 1851 when they  in turn were demolished to make way for the new House of Lords, and there is a fascinating engraving of Queen Victoria opening her first Parliament by processing through Soane’s Royal Gallery; not what one imagines at all!  All that remains today to commemorate the site at Westminster is this brass plaque tucked away in one of the inner courtyards of the new Palace, marking the spot of the original House of Lords chamber. 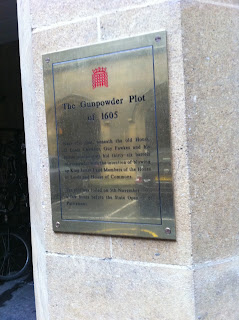