I have been collecting contemporary engravings of the 1834 fire at Parliament during my researches.  They’re quite hard to come by, but I have three of them.  This first one shows the view from the Lambeth bank of the Thames – from left to right: the Painted Chamber, the House of Commons Library, the residence of the Clerk of the House, the House of Commons (St Stephen’s Chapel) and the Speaker’s House. 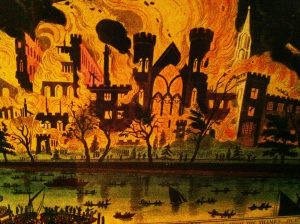 The interesting thing about this engraving is that there is another in the Palace of Westminster Works of Art Collection at Parliament – exactly the same design, but differently coloured.  These prints were churned out simply in black and white and could then be hand-coloured for an extra fee, or by the owners themselves.  The one at Westminster is much ‘bluer’ than this one,  with more of a washy-yellow set of flames, while my one has much more vibrant red and green in it.  I like this picture very much – it is naive but dramatic, with a real sense of the unfolding catastrophe.

Another engraving I own is the one below.  This is the view of the House of Lords from Old Palace Yard and is very crude and inaccurate.  This print has clearly been produced by someone wanting to make a quick buck, with no concern about aesthetics or realism.   It’s quite common, and I’ve seen versions of it online for sale and in other collections. My version is uncoloured, but the one in the Palace of Westminster Works of Art Collection is highlighted in lurid oranges and reds, which somewhat improves it.  But not much. 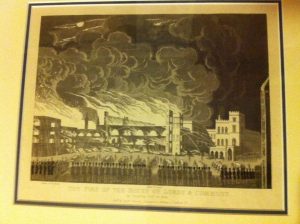 The third one – below –  is reproduced in The Day Parliament Burned Down, and does not exist in the Palace of Westminster Works of Art Collection.   It is partially coloured in blue and yellow ink.   I haven’t seen other versions of it elsewhere, or on sale.  I wonder if it is unique?  The interesting thing about this one is that the view it shows – of the Palace of Westminster from Abingdon Street – is probably copied from an existing engraved prospect of Old Palace Yard, with the smoke and flames, firemen and soldiers added on top: a quick and easy way of producing an engraving in double quick time for the ravening public. 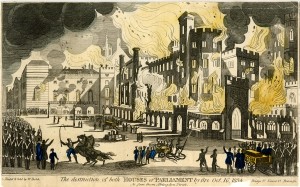