The 1834 disaster attracted huge crowds of onlookers. It also attracted large numbers of what The Times called ‘the light-fingered gentry’. Those heading towards the site of the fire from Regent Street found themselves jostled and overtaken by gangs of pickpockets racing down the street to get to the Houses of Parliament where they could exercise their dubious skills on the gawping masses. Watches and wallets were all lifted in numbers, but most especially gentlemen’s silk handkerchiefs, an indignity which even the Attorney General suffered.

I was intrigued by why silk handkerchiefs were so prized by pickpockets (other than the ease of separation from their owners). All I knew was that the Artful Dodger and Fagin’s gang in Oliver Twist, written just a couple of years after the fire, had a den full of them:

‘Make `em your models,’ [said Fagin] tapping the fire-shovel on the hearth to add force to his words; ‘do everything they bid you, and take their advice in all matters – especially the Dodger’s, my dear. He’ll be a great man himself, and will make you one too, if you take pattern by him. — Is my handkerchief hanging out of my pocket, my dear?’ said the Jew, stopping short.

‘See if you can take it out, without my feeling it; as you saw them do, when we were at play this morning.’

Oliver held up the bottom of the pocket with one hand, as he had seen the Dodger hold it, and drew the handkerchief lightly out of it with the other.

‘Here it is, sir,’ said Oliver, showing it in his hand. 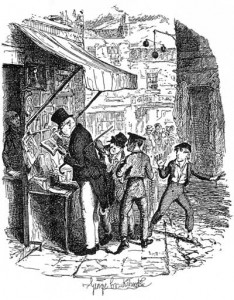 Then Twitter came to my rescue last weekend. Several experts responded instantly to my idle query on the subject. Professor Amanda Vickery of Queen Mary College, University of London, and author of Behind Closed Doors: At Home in Georgian England was first off the blocks: ‘ A silk handkerchief was a large fashion accessory – a key way to register fashion change – not a little hanky. Plus easy to lift.’ The Amateur Casual added, ‘A handkerchief is considerably easier to pinch from a pocket than a watch or wallet. The thief may well have pawned them. Although potential buyers would include – well – anyone I suppose. Particularly working class looking for a bit of finery.’

‘All secondhand clothing had value,’ confirmed Judith Flanders, author of The Victorian City: Everyday Life in Dickens’ London. ‘Hankies were just the pickpocket-able bits’. She added that the used-clothes market ‘Rag Fair’ by Petticoat Lane, and Field Lane in Clerkenwell, were the most well-known places to buy such items.

‘I think I remember from Mayhew’s London Poor that they were prized by costermongers etc and worn as almost a mark of the trade?’ said Nikki Coates. And finally, ‘You must include the fantastic Rowlandson image of Rag Fair’ suggested Louise Falcini. So here it is: 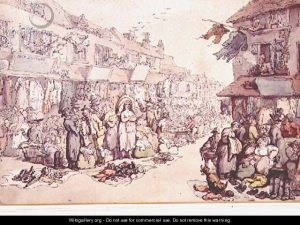 And voila! I have lifted all these great comments to create a new blogpost. Many thanks to all those who ideas I have snaffled so shamelessly.