In today’s money the cost is even more surprising: a pint cost the equivalent of just 16p.

Why is that? Well, there are all sorts of factors to be taken into account apart simply from inflation – the costs of labour for example were much lower than today, and the amount of punitive duty is obviously much higher in 2012. It’s 16p if you compare it with the retail price index. But to get a real sense of what this meant in 1834 you really need to look at the cost of a pint against average wages (in which case it becomes roughly £1.55). 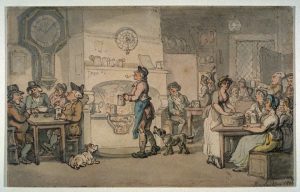 An amazingly useful tool to help you with these conversions for any date from 1830 onwards is the online Measuring Wealth calculator. This explains the complexity of attempting historic rates of exchange (do you want average wage conversion, GDP, retail price index and so on), and includes some very useful essays for non-economic historians. And there’s even a funky little App available from the site called the Time Traveller’s Investment Calculator if you need such a tool with you for research trips.