Those of you who’ve recently seen The Iron Lady will also have seen a very experienced body double in action.  No, not a stand-in for Meryl Streep (congrats on the BAFTA, by the way, Meryl!), but a regular stand-in for the Palace of Westminster: Manchester Town Hall.

Alfred Waterhouse’s design at Manchester was, like Barry and Pugin’s in London, innovative and neo-gothic. Both buildings were subject to a competition to find the best architect to create  them. But whereas Barry had to fit a new Palace onto the narrow strip of shoreline along the Thames, and work around the footprint of the existing Westminster Hall, Waterhouse had to work in perhaps an even more challenging  space which required a triangular construction.  Both buildings have famous clock towers, and both are embellished inside and out with statues of famous worthies. “Teach us to number our days” from Psalm 90 proclaim the clock faces at Manchester.  At Westminster, the Golden Jubilee pavement sundial in Old Palace Yard quotes Shakespeare’s Henry VI “…how many days will finish up the year, how many years a mortal man may live”.  And inside, the murals at Westminster are sometimes great, sometimes unintentionally hilarious to modern eyes – there are a few of those in Manchester too, including Ford Madox Brown’s Expulsion of the Danes from Manchester, showing one of the Vikings tripping over a piglet in his haste to escape the doughty Mancunian defenders. 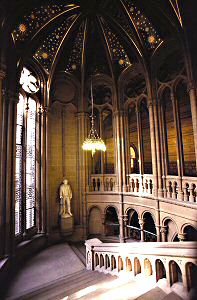 There are, of course, some significant differences.  The Town Hall’s style is 13th century gothic, whereas the Houses of Parliament are a sort of Perpendicular skin overlaid on a much more regular building (“Tudor details on a classic body” as Pugin once explained, not entirely supportive of Barry’s technique).  Waterhouse’s work began in the 1860s, just as work at Westminster was moving into its second generation of development. And Waterhouse was much more successful at regulating the heating and ventilation at Manchester than Barry and his successors ever managed.

Nevertheless, Manchester makes a very creditable performance each time you see it in films (such as the 2008 Sherlock), and on the TV(as in the political thriller State of Play).

If you’d like to know more about Manchester Town Hall and Waterhouse’s majestic design, have a look at these excellent clips about its exterior and interior  from Jonathan Foyle’s 2010 BBC4 series The People’s Palaces.  And enjoy its performance in The Iron Lady; shame it can’t win a BAFTA too.