News of some other mementoes carved from the ruins of the old Palace of Westminster following the 1834 fire has reached me. This time they’ve been created from salvaged stonework, and depict a mysterious man and woman.

They’ve been drawn to my attention by landscape architect and historian Todd Longstaffe-Gowan, author of The London Square, (Yale, 2012) and belong to the T. Longstaffe-Gowan and T. Knox Collection. 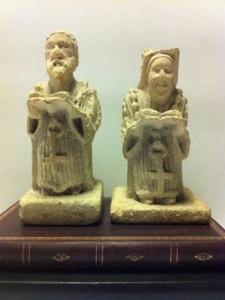 They’re really rather curious objects, each about 15cm high.  When viewed straight-on they might be a late-mediaeval monk and nun, both with heavy crucifixes and singing from missals.  He has a thick beard (though no tonsure), and she a stiff linen wimple. But look around the sides and you get a different view.  They are both seated in wicker armchairs, and their clothes are strangely decorated.  Their sleeves are acanthus leaves and the woman’s headress and cuffs are strangely bobbled. She reminds me a little of Tenniel’s Red Queen in Alice in Wonderland.  Todd wonders whether they were actually carved from salvaged stone by the masons building the new Palace (signatures are carved into the bases).  I wonder whether they were part of a larger set – maybe a chess set? Perhaps they were samples produced by miniature stonecarvers to show off their various techniques to the trade?  Or maybe they are simply a bit of faux medieval antiquarian fun, created in the aftermath of the fire when a great debate raged in the press about what sort of  style was suitable for a new Parliament building? What do you think? 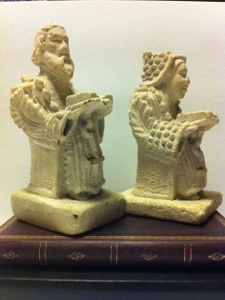 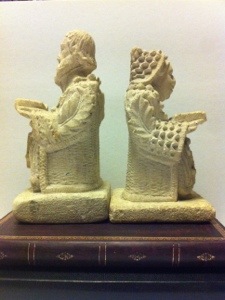 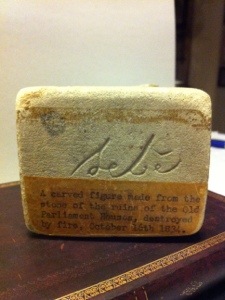 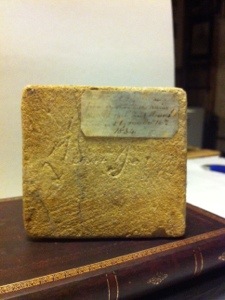 Relics of the Old Palace of Westminster