Well, 2013’s been a year and half, that’s for sure. Thanks for sharing it with me. Here’s a bit of a recap for those not on the rollercoaster:

January The Day Parliament Burned Down is shortlisted for the Longman-History Today Prize. I attend the jolly party, and while the book doesn’t win, I’m just delighted to have been nominated. I get to meet lots of fun people (including some heroes like Diarmuid MacCullough) and another OUP book wins, so we all go out for a slapup Thai meal in Piccadilly with our publisher anyway. Result!

February The Day Parliament Burned Down has also been shortlisted for the Paddy Power and Total Politics Political Books Awards. It’s up in two categories: Political History Book of the Year, and Political Book of the Year. I go to the awards ceremony with my agent Bill Hamilton and my other half at the iMAX in Waterloo, London. I think I’m in with a bit of a chance for History Book of the Year, so I don’t give the aperitifs too much welly before hand; I enjoy the canapés, though. The venue is packed with politicians and media types being paparazzi-ed frenziedly. I’ve slipped in un-noticed.

At the awards ceremony itself, I find myself sitting beside Christopher Duggan, another nominee for History Book of the Year. We shake hands and wish each other luck. He wins, with his excellent book Fascist Voices, which later in the year goes on to win the grand-daddy of all history book, prizes, the Wolfson. Very well-deserved. I sit through the rest of the awards, thinking that really I didn’t need to hold back on the drinks since I wouldn’t be making a speech after all. My mind turns to thoughts of supper, and those nice-looking snackbowls being prepared for later. All of a sudden, we’re nearly at the end, and the Political Book of the Year is announced. My book wins. Gobsmacked. Then terrified. No speech for this prize. Help! I stumble down the auditorium, and am presented with the prize. I burble my thanks. It’s all over. Lots of people come up to congratulate me afterwards, including a number of women who point out how male the shortlists and judges have been, and how great it is that a woman won top prize. Thrilled to have won, and thrilled to have done my bit for the sisterhood. I slip out un-noticed, too. The morning after, I take a large box of Laduree macaroons into work, to celebrate with colleagues.

March I take a trip to America, and go on a lecture tour for the splendid Royal Oak Foundation, talking about the fire on the east and west coasts.

April Still on the US tour at the beginning of the month, and I get to see one of Turner’s oil paintings of 16 October 1834: a real treat. 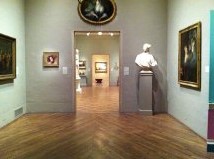 At the end of the month I visit the Ashridge estate, and while I’m there, get a taste of what the old Palace really looked like.

May After a couple of false starts, and months of writing a proposal, I sign a contract for a new book. What’s it to be? Well, watch out in 2016 for it…

June I speak at the Hay Literary Festival, and write about why talking to audiences is fun, and my experiences since publication.

July Even though the book was published 11 months ago, reviews of the hardback continue to trickle through in various publications, including Oxford Today.

August The paperback edition is published, with a few factual corrections and a nice front cover puff from Prof Mary Beard. I sign a hundred copies for the Houses of Parliament Shop. 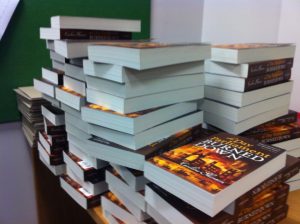 September An exhibition I’ve curated on the fire is installed in Portcullis House, and the public come to take a look during Open House Weekend. 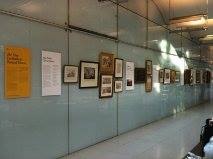 October It’s the 179th anniversary of the fire, and the History of Parliament asks me to write an article on it for their website, which I am delighted to do.

November I write about my Books of the Year for History Today. And in a neat coincidence, the New Statesman names the paperback as one of its books of the year too. Hurrah!

December Back in September I visited Canada, and took a look at the Parliament building in Ottawa, destroyed by fire in 1916. Based on that, I write an article about this for a Canadian political periodical, published this month. And as the end of the year draws close, I buy myself a couple of early Christmas presents, and look forward to putting my feet up over the festive season… 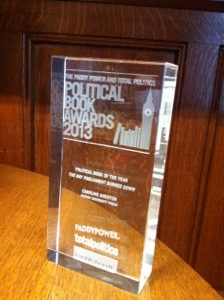